Is Red Lobster's Endless Shrimp Worth It? Review

Let’s all agree, no one makes food commercials like Red Lobster - crab legs flying, butter splashing, texture and flavor leaking through the screen and into our consciousness. No other commercial could tempt me to give in to the Madison Ave. siren song of their Endless Shrimp. Tonight I crashed my ship into those culinary rocks at the Red Lobster in Roseville, MN.

In the interest of full disclosure, I waitered at Red Lobster in Camphill, PA after my junior year in college, but hadn’t graced their fine establishments since. I knew I was in trouble when my waitress (spoiler alert! - who was wonderful) asked what side I wanted and I asked for Hush Puppies. She had no idea what I was talking about. Eventually we figured out they were the precursor to the the current cheddar biscuits (which were also amazing). So I started off the meal revealing my age and ancientness. This is old news to my teenage daughters.

Red Lobster’s Endless Shrimp is $17.99 or $19.23 in Minnesota with tax. You get a side, a salad and all you can eat of 4 different shrimp preparations - Grilled Teriyaki Shrimp, Hand-breaded Shrimp, Habanero Shrimp Bites and Garlic Shrimp Scampi. If there were any more it would dissolve into a scene from Forrest Bump. You start off by ordering two shrimp varieties to start with and then order one at a time until you are ready to burst.

So the biscuits and caesar salad came and it was wonderful, especially the cheddar biscuits. These light and fluffy little balls of goodness are as good as any bread served in any restaurant I have been to. If one’s not careful you could just pound those and go home full, skipping the shrimp altogether. The salad was also pleasant.

I have to admit at this point to ordering the fries as my side. Yes, the broccoli would have been wiser and would have added some color to an otherwise beige plate, but I have a weakness and I’m not afraid to admit it. I like the idea of fries but disdain the shame and guilt that follow. We’re all a work in progress. I’ll just say, Red Lobster knows how to make fries. 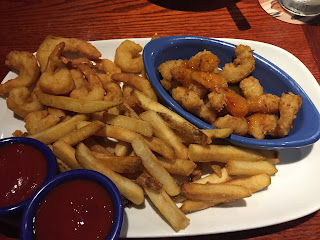 Red Lobster is in a tough position as are all national restaurant chains. They need to make food that basically appeals to the lowest common denominator. Their food needs to be accessible to the majority of Americans in order to sell in the numbers their stock holders desire. Applebee’s, Friday’s, Chili’s and their ilk are all in the same boat, they must provide food that hits only the center of the American food target. Thusly, their food has to be void of too distinctive a taste and instead aim for the sweet top of the bell curve of the American palette along with lots of sodium clouride. In the case of Red Lobster, this is only accomplished by sucking all the shrimp flavor out of the shrimp.

Red Lobster’s shrimp has the texture of shrimp without any of the residue of the seas from which it was taken. The texture is good, they are nicely deveined and are pleasing to the eye, but don’t necessarily taste like shrimp - more like crunchy chicken. So the hand bread shrimp was fine but not special. The Habanero and Garlic Shrimp Scampi were fine but not definable as sea food. 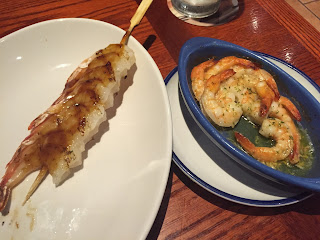 Unfortunately the Teriyaki Shrimp was inedible. The shrimp was cooked on a skewer and then brushed on one side with a thick asian-like sauce. As the sauce was applied after the cooking was finished it lacked any of the necessary caramelization and searing that gives teriyaki its flavor. I couldn’t finish it. 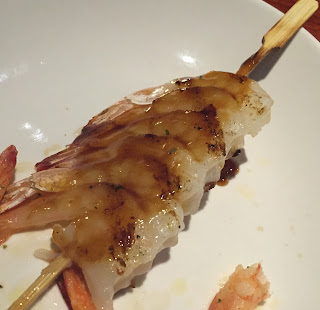 So for $17.99 it’s a lot of food, and you get great service and those amazing biscuits, but the shrimp itself, while endless, is not something i would go back for again. But to be clear it’s not bad, just not good.